The firm was uniquely honored and privileged that Hon. Sol Wachtler, Former Chief Judge of the New York Court of Appeals, visited our offices on Thursday, October 25, 2007.  Judge Wachtler met with the firm’s attorneys for most of the morning, discussing the procedures for filing appeals in the Court of Appeals, the nature of the issues the Court deals with in appeals, and important cases decided by the Court.  Judge Wachtler also shared his experiences as the Chief Judge of the highest court in the State. His visit was a fascinating opportunity for our attorneys to meet one of New York’s leading jurists.

As Chief Judge, Sol Wachtler wrote many groundbreaking legal opinions, many of which have since been followed in other states, as well as in the courts of New York State. Judge Wachtler is an Adjunct Professor at Touro Law School and Chief Executive of Comprehensive Alternative Dispute Resolution Enterprise (CADRE), an alternative dispute resolution firm based in Great Neck. 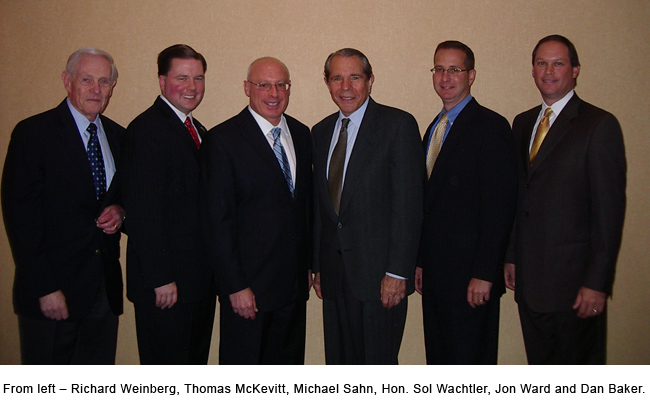 Jon Ward has been named to serve as a Member of the Community Board of Southside Hospital, part of the North Shore-Long Island Jewish Health System.  In addition, Jon has become a Member of the School Board of the St. Patricks School, also located in Bay Shore.

Michael Sahn has joined a distinguished group of dedicated individuals to help the families of children facing serious illnesses who count on RMH services.   Robert S. Weitzner, President of the House, said “We are very pleased to welcome Michael to the Board of Directors and look forward to working with him. His expertise and experience will be a wonderful asset to the team and will assist us in our mission to help families who depend on our services.”

Michael Sahn presented a report on changes and developments in New York State zoning and planning legislation before this well-regarded professional group in late March.